“The Rockhouse is a courtyard home organized around a large rock bluff in a gesture of embrace. From the first visit to the site we felt the very strong spiritual/natural presence of this rock. We wanted to incorporate it in the design as such that its presence could be felt in the house and give life to the space. So we designed the house around the rock, we exposed part of it inside the living room, and let the rock bluff frame the central courtyard space.

Upon completion of the project, we had people ask to have a walk through the house. There seemed to be a recurring theme in the comments we received – some talked about the peaceful and serene nature of the home, a sense of ‘grounding’, of earthiness, safety and protection. One person related having a ‘spiritual experience’ upon entering the home. Another person commented that this house would be a place to bring cancer patients to recover. These comments intrigued me, as they were all in essence referring to the same thing – the ability for design to heal in some way, whether it be physically, emotionally or spiritually.

Using the design of spaces to promote healing is not a new idea. But perhaps the culmination of ideas about regaining balance between the mind and the body, and regaining balance with nature with the rise of sustainability and solar passive strategies may offer a new light on the understanding of healing through design. But what is this illusive quality of healing that can be felt in a space and how can design achieve that? Is there anything in the design process itself that can enlighten this discussion?

The lot where the Rockhouse was to be built sat on the market for a long time; it was considered undesirable as a building site because of the massive presence of this rock bluff on the majority of the property. For a conventional building design it would entail a large amount of blasting. 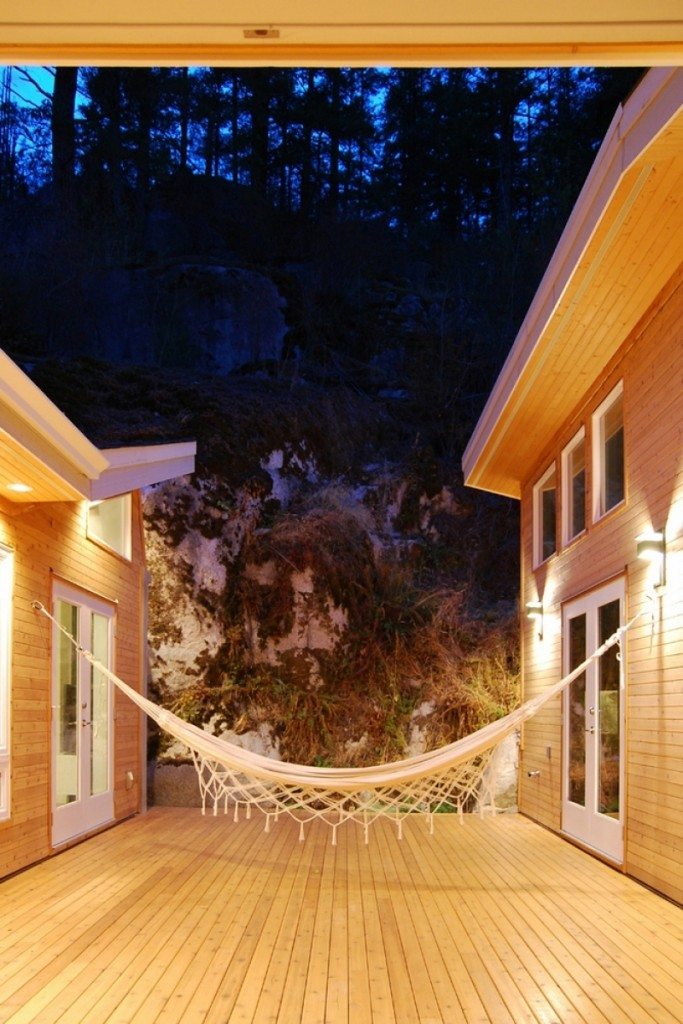 We reacted against the violence of blasting the rock. We wanted its presence to remain and the design to bring out this feature rather than to overtake it. So we chose instead to enclose a portion of it in the living room. It became clear from the beginning that enclosing this natural feature in the wet coastal climate of British Columbia was going to be a building envelope challenge. To keep the surface of the rock dry we first thought of having to epoxy the cracks on the rock. However this idea quickly lost its appeal as we realized that plugging a hole in a natural material like rock would only lead to nature finding another way out, only in an unpredictable spot. So we decided to work with the rock, instead of against it. We found a portion of the surface that was always dry and we selectively enclosed that portion of it. In this way, any water that infiltrated the rock could still drain out as it normally did. Without realizing it, what we were doing was trying to find a way to balance our actions with nature, rather than to impose our intervention on it.

Another central idea to the Rockhouse’s courtyard scheme is the connection to the outdoors, which also enhances the feeling of unity of the man-made with the natural world. Courtyard houses are a historic archetype. The indoor/outdoor connection for me is something that resonates very strongly with my experience of vernacular architecture in my home country, Brazil. Having a tranquil and protected outdoor space where one can hang a hammock and be surrounded by natural beauty is a lifestyle feature of many Brazilian houses, and in a very simple way, it is a nurturing experience. The sense of being protected while at the same time exposed to nature has a healing quality of its own.

But what I realized afterwards is that the healing quality of the Rockhouse that the visitors were referring to is not something that comes entirely from the lines that are drawn on paper; it is as if something was added to those lines and materialized in the finished project. As such, the design worked more as a link, or as a catalyst that integrated elements that were already in place – the bodily, the physical and the spiritual. When these things are connected through design, a balance is achieved and with it a sense of healing, which is the intangible result that we seek in our work.

Somewhere in the balancing between human intervention and nature, in the interplay between the physical built form and the pre-existing natural/spiritual source, emerges an elusive healing quality in architecture, which is something that we seek to understand and bring out through design.

From the hammock strung across the protected courtyard space of the Rockhouse, I surrender to the beauty and the mystery of this space, I feel my soul and my creativity being nourished, healing begins to take place… And I feel myself coming into balance.”

If you liked this, you’ll probably enjoy viewing Forest for a Moon Dazzler…

PrevPrevious PostLevya 506 – melding the past and the future
NextCasa Kike – 16,000 books and a grand pianoNext