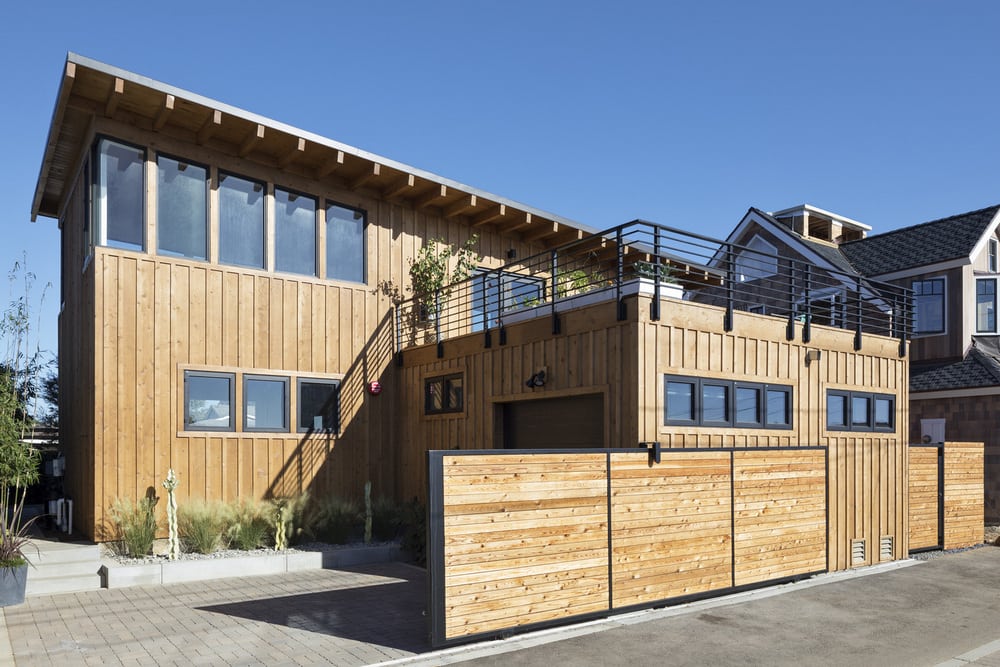 Cornish House is a modern home that sits on an irregularly-shaped lot. The trapezoidal lot, although small, provides beautiful views because of its hilltop location. Because of this, the inhabitants of the home enjoy panoramic views of the ocean from their bedrooms.

The façade is made of timber, left in its neutral color state, with low concrete walls around it. Ribbon windows, exposed wood beams, and large overhangs are also seen. The house features a custom-made gate and a water feature that separates the dwelling from the street.

The two-storey Cornish House has a reverse floor plan. To maximize the views, the common areas are found above while the sleeping spaces are found downstairs.

Brett Farrow Architect has completed a new residential project located in the Southern California Coastal community of Encinitas. The small two bedroom, reverse floor plan home makes full use of the site’s panoramic ocean views from its hilltop location on a small and irregularly shaped lot. The relatively small 2,727 square foot trapezoidal site originally had a small studio with an illegally converted garage space used as a bedroom.

This limited footprint combined with restrictive zoning and height limitations produced an extruded form and design that was inspired by the site’s constraints. The trapezoidal form of the site was brought through both in the plan and elevations with the pitch of the roofline, which slides at a steady slope of 1:12 from the high point in the living room down to the opposite corner in the kitchen.

Butt glazed corner windows remove the visual barriers to the exterior creating an effect that extends the space. Large overhangs and exposed structural wood beams elongate the ceiling lines visually stretching the space further while effectively managing the full exposure to harsh western sunlight while welcoming morning light through a ribbon window that frames views of the tree lines and hilltops to the east.

In order to take full advantage of the views available from the site, a reverse floor plan was selected with living, dining and kitchen above and two sleeping rooms below that both face onto private courtyard garden spaces. Several species of wood were used throughout the home both inside and out. Western Red Cedar was used for the exterior in a true board and batten system. Bright sunlit volumes are framed with contrasting geometrically tapered, dark metal windows. Simple, honest, natural materials were used throughout the home. The structure is the finish.

Bi-folding doors are located in the sleeping rooms and facing onto the view deck from the dining area in order to maximize the connection to the outdoors and extending the home’s small footprint to the exterior garden spaces. A double-sided low fireplace connects and organizes the split-level dining area and living space while also allowing for warmth while enjoying cool sea breezes.

A custom entry gate, low concrete walls, and water feature are placed to create a boundary to the busy street. The subtle hush of the water further buffers the home from street noise and reinforces the quiet, contemplative quality of the garden spaces. Though fitted into a relatively dense neighborhood, the home maintains privacy and achieves an openness that takes full advantage of its coastal climate and location.