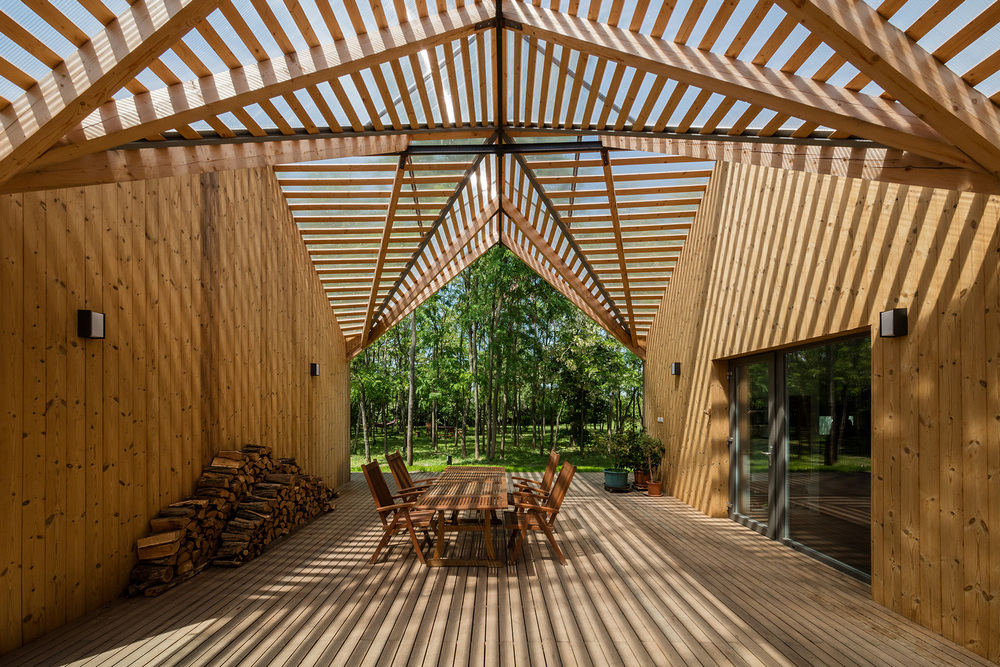 The Wooden House is a peaceful family retreat in a forest of acacia trees. A contemporary country house, it is perceived to be the homeowners’ antidote to hectic city living. The structure replaces an old farmhouse but has somehow retained the footprints of the previous home. It’s where old meets new – a traditional Hungarian farmstead given a modern twist.

The design of the house is a response to the rising demand for outdoor/indoor living. The architects took inspiration from a traditional Hungarian farmstead. They then adapted the structure and gave it a modern, contemporary flavor. They made sure that the design meets the needs of the present time.

One of the more interesting features of the house is the central courtyard. It is a tranquil space that optimizes what the outdoors have to offer.

The Wooden House is almost sculptural in nature. Geometric lines and shapes cast shadows with the sun look hypnotizing. Full glass walls bring the outside in – or the inside out.

Modern design can often fly in the face of the traditional values of the past. In some cases it can aim to improve by ignoring the needs and concerns that we once had, but this architectural design in Hungary shows that – for home structures, at least – those same values are just as important now as they ever were. Having won the audience’s vote at the Media Architecture Awards, it’s clear this is a value that modern homeowners are considering.

In the small village of Algyő in the Great Hungarian Plain, this project took the classic cross-section and layout of a traditional Hungarian farmstead and reconstructed it with a modern eye, replacing an old farm house that previously stood on the site. With the surrounding area suffering from depopulation due to global and national changes in the needs of agriculture, it was important that the project maintain the traditional values of such a building but with more contemporary needs.

As a result the most iconic aspect of the project is the central courtyard of the building, which is enclosed by its three sides to create an intimate setting among the trees of the surrounding acacia forest. The various modernized elements take aspects that were no longer needed from a traditional farmstead, and repurposed their use; what once would have been stalls to store animals or maize are now garages, while a corner section removed part of the interior structure but maintained the roof to create a quaint, sheltered, outdoor seating area.

With the project’s client sharing his time between the hectic life of Budapest and the countryside, it was important that the house not only facilitated the needs of any typical urbanite but also created a tranquil space that could be the perfect place for him and his family to escape from the stresses of city living. The outdoor area encapsulates that, with its own pool and a number of terraces of varying heights to make use of. There is a modern addition in the form of the library, a white cube protruding out from the otherwise entirely wooden structure. The secluded spot embeds itself within the forest, intentionally representing urban architectural design but also creating a quiet space to read and relax.

The intention of the architects was to utilize a minimal floor-plan, making use of the traditional roof to create an interior space that was at once open, warm and welcoming. Though the building mimics the orientation of the original farmhouse exactly, its position within the wood was carefully selected to minimize the impact to the forestry and help habitation within nature to be as seamless as possible. The modern farmhouse also features windows on either side of the building to allow light to seep in from every angle. This has created a much brighter and more airy space that is very much in contrast to the darker rooms of such traditional houses, whose functions relied on protection from the elements rather than anything else.

Similarly, this retelling of traditional values takes the core idea of individual units – where space had to be alloted for particular functions – and integrates it into the livable space. In addition to the separate wing for the garages, the building is smartly divided into living areas and bedrooms, effectively connected via the outer courtyard and sheltered club space.

This modern farmstead is expressing the contemporary need for smart integration into an environment while extolling the traditional values that comes from the building’s folk inspiration.

If you liked this home, then you’re to like the Bamboo Villa…