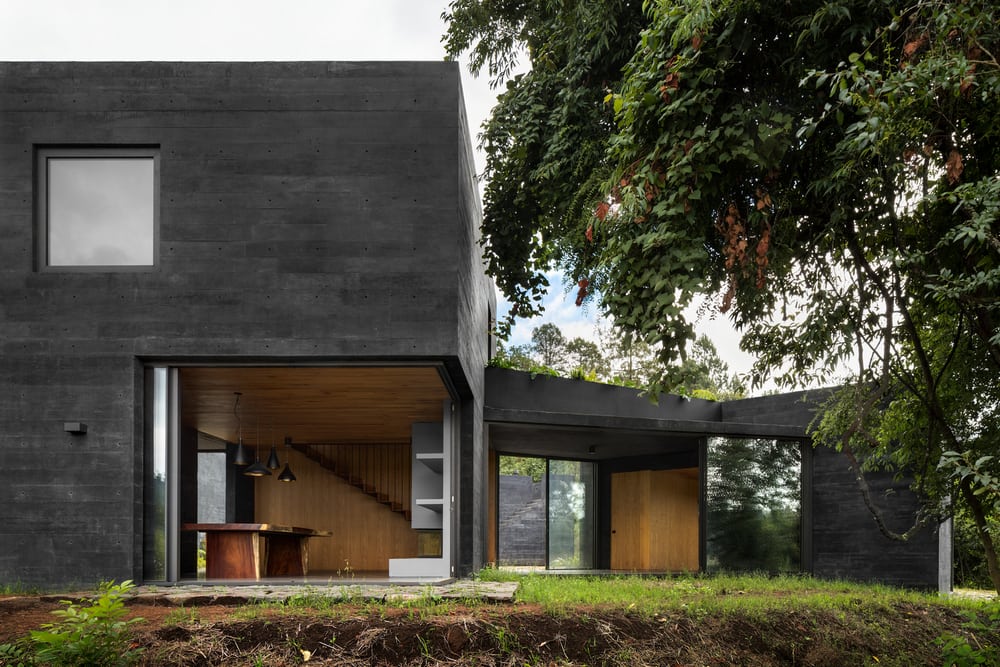 Casa Bruma is located in Mexico City’s southwest mountains, surrounded by nature and vegetation. Its design allows the weekend home to seamlessly co-exist with the landscape.

During the construction process, the architects made sure that no trees were disturbed. This resulted to nine sequences of cuboid pavilions, assembled in an irregularly-shaped inner courtyard.

Some of the nine structures are equipped with green roofs. Sleeping and living spaces as well as the kitchen and dining areas are linked together by glass walkways. Guest pavilions are separate villas.

The use of black concrete in Casa Bruma’s façade allows the house to quietly blend into the surrounding environment. Despite the dark exterior, the inside of the home features a warm and welcoming palette. It has oak ceilings and basalt floors, with ample-sized windows that let the light in.

It is a project that redefines the idea of house and structure different spaces around a large patio. This solution was made to maintain the existing trees of the land and to each space of the house receive morning and afternoon light. This produced a kind of exploited house, where the dwelling is composed of blocks that lean towards the views and orientation, and also to respect the original vegetation.

The program is distributed in nine blocks so each zone has a certain independence and, at the same time, a relation with the different spaces. The blocks of kitchen-dining-room-main room and children’s room are linked by roofed corridors. The rest: two blocks for guest rooms, services and garage finish to form the central courtyard and allow each block to face this courtyard and open to the other end generating private but fully open views to the landscape. Two blocks have terraces on the roof, while the rest are green roofs.

Each block has a different height that corresponds both to its particular location within a topography with steep slopes and to the different hierarchies of each space. The main room is located on a second level, above the children’s room and on a study that has its own terrace. A larger study is located on the dining room and from there you can access one of the terraces on the roof, which is located above the room. The other roof terrace is accessed from a staircase in the central courtyard, which highlights the independence of the blocks but also the sequences and communications that exist between them.

The house is made up of four materials: apparent black concrete, wood, stone and glass. Each block adapts to the topography and makes the volumes appear and disappear in the landscape. The color and the stony condition of the house helps to give the project a timeless character. The access is the point where this becomes more palpable, since it is a semi-hidden route where fragments of the blocks appear that lead the user in a slow and stepped way to the patio, where the blind blocks are discovered and open to the transparent steps that connect the main areas. These steps open both to the patio and the exterior landscape and reveal a series of views that somehow penetrate the protected area of ​​the courtyard. Thus, while the patio closes to the outside, it also anticipates what is on the other side of the different blocks.

Black-clad houses are becoming a favorite. See Black House to know what we mean.

Cape Schanck House – as dramatic as the landscape…