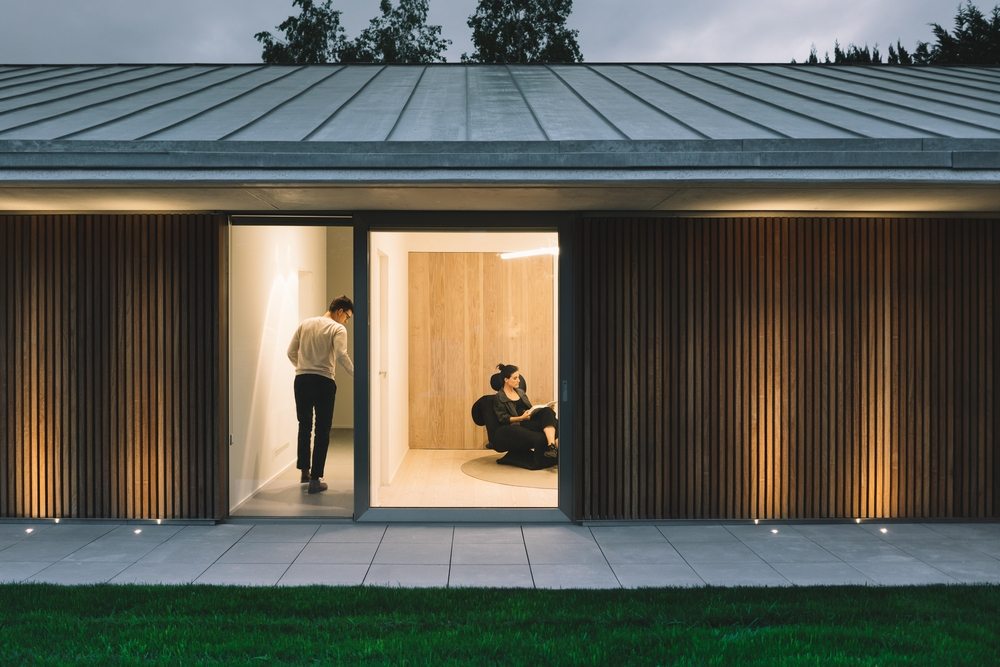 Casa Öcher is a long concrete structure that resembles a wall. True to form, it serves several functions: as protection, shelter, and security. Towards one end, it forms into an L-shaped building, enclosing a garden.

In retrospect, the house must have been designed for an introvert. Living spaces were purposely kept out of the public eye – away from the neighbours. The garden is a private enclosure where the homeowners can be themselves. The secluded theme stands in stark contrast with the surrounding plots of exposed land.

The exterior and interior parts of the house are made of geometrical and abstract shapes. Where raw textures are found, smooth surfaces are quick to balance them out. Casa Öcher combines privacy, serenity, and functional design in one architectural piece.

The element that unfolds the project is a strong concrete wall. The wall, in some slender areas and in other semi-buried areas, is a protection mechanism: on the one hand, it protects the dwelling from negative orientations -the north and the west- and, on the other hand, it also protects it from views and looks from the surrounding plots. It is also a mechanism of land containment, since it allows housing to generate flat spaces and adapt to the steep slope of the land.

The wall, then, traces a clear “L” gesture whose consequence is very clear. The house opens up fully towards a horizontal and very private garden, oriented towards the south and towards the east. The façade that overturns on such a garden is soft and warm: it is configured by iroko wood slats and large glass cloths – they are the rooms in the long body and the living room in the short body. On the other hand, the north and west facades are harder, they are the area of ​​the wall, the back of the “L”; They dominate concrete and zinc panels. Only some colored embrasures allow the entry of light in very specific points.

A second gesture in “L”, traced by a smaller wall, generates the lower body where the lobby, the service area and the garage are housed. This body is also a defensive element: its front facade, abstract and determined by the iroko wood, prevents any view of the interior, and its rear facade, generated by the aforementioned wall, acts as a breastplate from the garden: it protects it from the street access and makes all the views from inside to the distant landscape.

Constructively, the house is understood as a set of plans, does not seek to be a language of boxes or volumes. Thus, the aforementioned concrete walls are the planes bordering the land; iroko wood surfaces are the planes that generate the enclosure towards the garden and, finally, the large zinc roof is a plane that flies, which levitates over the wall. In fact, its structure is suspended from the wall by metal pillars. And there are some slender metal pillars, too, which support the roof in the plane of the garden facade.

It is a discreet, introverted house; and its star space, the central garden, is a calm and soft, natural environment that escapes any sensation of exposure. It is impossible to perceive, once located in the center of such space, that the house is in an urbanization of very narrow and exposed plots. The materials are natural, it could be said that sincere, they are not painted or painted: the concrete with the texture of sawn wood, zinc (natural zinc, not pre-patinated) and the beautiful iroko wood treated with oils open pore.

On the inside, on the other hand, material discourse is almost the opposite. The rawness of the natural materials that dominate the exterior gives way to the smooth and white surfaces of the partitions and the underside of the roof. However, fragments of the material “sincerity” that characterize the external environment appear: for example, the floors of the rooms and certain vertical walls are covered with natural Danish pine wood; or, also, the pillars, although painted in white, are always seen from the inside. In short, the interior space is a more abstract environment, determined by the inclined shapes of the ceilings and of some partitions, and by the light so soft that it slides through them.

Maybe the hall is the culmination of the project. It is the end of the “L”, the larger interior space and the area where the interior and exterior merge. A huge glass slide and the porch that creates the roof allow the use of this space as a continuity of the garden itself. The kitchen and the soft Danish pine wood are left behind, and on the front, framed by the low height of the porch (exactly 236 cm) and the sloping roof, is the garden and the views of the mountains of the basin of Pamplona. Isolation, privacy and the naturalness of certain materials treated with great care are, in short, the ingredients of this residential work.

See this breathtaking architectural piece from Spain, the Modern Chalet.