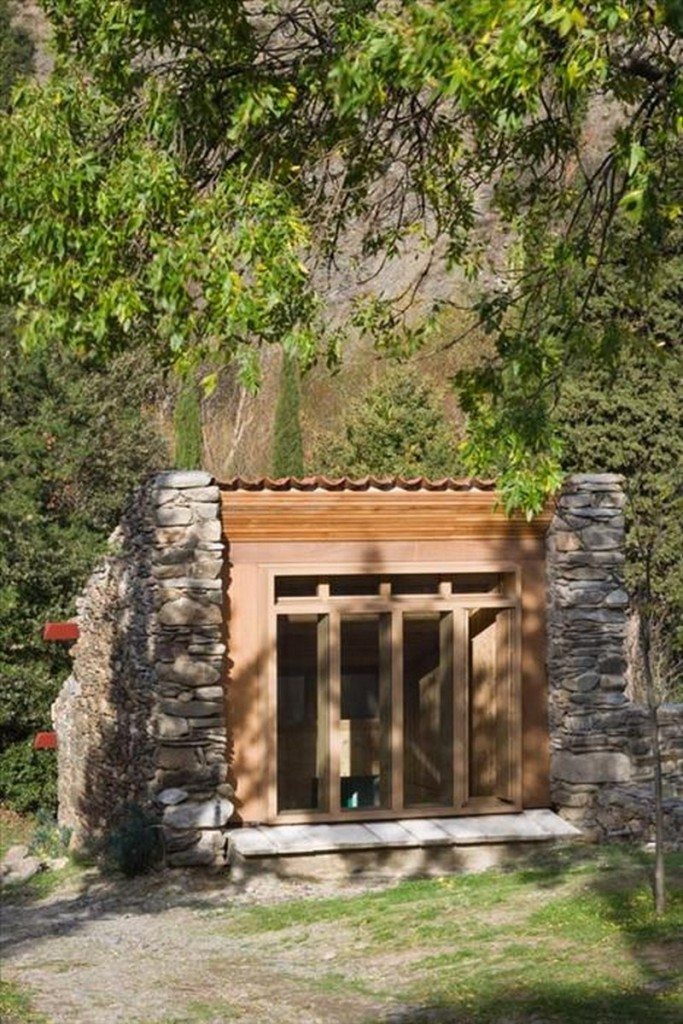 In 1981, Londoners Anthony and Gillian Blee purchased the ultimate fixer-upper. The property in southwestern France was idyllic, but its old mill, built in 1822, and three flanking outbuildings had fallen into terrible disrepair.

“We really wanted to capture the ruinous quality of this old building rather than do something overtly new,” Blee says. Before construction could begin, however, he and Halligan had to patch the remaining walls using stones found in the nearby river. Wherever a wall had collapsed, the designers inserted framing to create windows and doors. For the roof, they turned to the original tiles. “My father’s terrible at throwing things away,” Blee says. “We took the tiles off 30 years ago, as it was too dangerous to have them up there. They’ve been sitting in the fields ever since, and this was out last chance to use them.”

Bit by bit, the couple restored each building with the help of family and friends. In March 2010, Blee and his design partner, Lee Halligan, completed the final renovation transforming the last structure into a 215-square-foot cabin for two. After prefabricating the timber framing in sections scaled to fit into a Renault van, Blee and Halligan drove through the chunnel to construct the interiors on-site. With no access to electricity, plumbing, or other utilities, the duo turned to the land for materials and to the sky as a source of energy.

To power the building, Blee and Halligan hooked up two solar panels—though not without difficulty. “The roof faces the wrong way—north—so we couldn’t mount the panels on it,” Blee says. Instead, they affixed the two 1.5-by-1.5-foot solar arrays to a nearby existing wall and ran cables back to the structure. To increase efficiency by not having to convert the 12-volt power coming from the panels to higher, more appliance-friendly wattage, the architects installed 12-volt light fixtures throughout. “You can’t plug a laptop into the wall, but it’s a more simple and robust system: just two panels wired into the battery,” Blee says.

To heat the small structure, Blee and Halligan installed a 17.75-inch-tall, 15.75-inch-wide, and 15.75-inch-deep wood-burning stove equipped with a built-in water boiler. The stove was built into an old doorway that was no longer needed. By wrapping the walls in sheet steel, Blee and Halligan made the area fire-resistant, and the warmth from the stove is amplified as it reflects into the room. Though it’s handy in the winter, the stove-boiler combination is merely decoration in the summer: “It’s so hot that we just bathe in the river nearby,” Blee says.

The building takes advantage of passive heating and cooling, thanks to Blee and Halligan’s strategic design to capture the most sunlight in the winter and provide the most shade in the summer. The above-ground glass facade faces east and draws in the daylight, but when the sun proves too strong, whoever is staying in the structure can close the internal shutters to beat the heat.

We think it’s a fantastic renovation.  What do you think?

What are you thinking? Let us know via the comments box below…