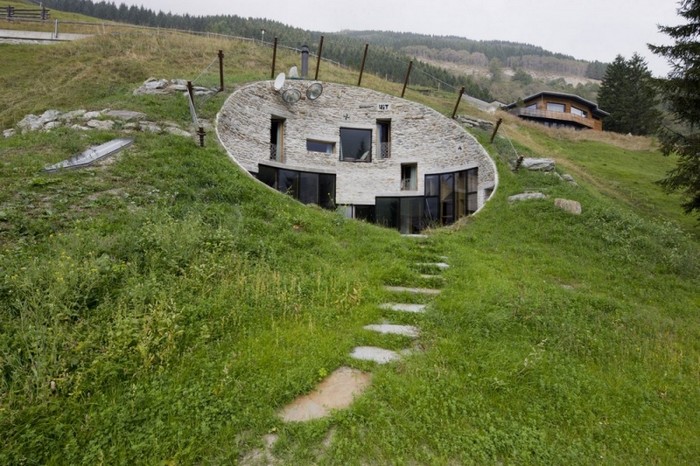 Most of us would think twice before even considering an underground home.  Yet such homes offer some unique advantages, both ecologically and for the security conscious.

These notes are from co-designer, SeARCH:

SeARCH and CMA collaborated to create Villa Vals, a holiday retreat dug in to the alpine slopes of Vals in Switzerland, a town of 1,000 made notable by Peter Zumthor’s nearby Therme Vals spa. It was a visit to this architectural icon in the Graubünden Canton that inspired Bjarne Mastenbroek’s dream of building here. Typical in SeARCH’s designs, the surrounding nature has been left undisturbed and unobstructed by any sort of architectural development. Not only does the project defer to the natural landscape, but also to the vernacular architecture while protecting the views of the nearby spa. Atypical of alpine architecture, the villa still uses local building traditions and materials including its façade made from Valser quartzite recovered from the site and found in the nearby thermal baths and on the roof tops of Vals. A stone and wood bi-level graubunder barn ubiquitous to the Alpine hills has been integrated into the plan and given new life as the entrance to the house via a 22-meter concrete tunnel. The house is experienced as a welcoming light at the end of a tunnel.

The introduction of a central patio into the steep incline creates a large façade with considerable potential for window openings. The viewing angle from the building is slightly inclined, giving an even more dramatic view of the strikingly beautiful mountains on the opposite side of the narrow valley. A critique on the Swiss need for perfection, the villa expressly exhibits its experimental qualities. The windows within the façade have been arranged in order to display the various levels of the interior, which in turn are like nested concrete boxes. Custom cast concrete icons in the façade serve as vents and flues. The stone courtyard features a natural spring and a hot tub (dutchtub) from which one can enjoy the breathtaking views across the valley in privacy. Being there surrounded by the snow capped Alps makes you feel as if you’re a part of the elements.

The concrete interior is offset by rustic qualities further anchoring the building to the surrounding landscape including oak panels and doors and natural stone steps. The contrasting interior acts as a neutral backdrop. Dutch designer Thomas Eyck was called in to oversee the interiors which features furniture, textiles and ceramics by Dutch designers including Hella Jongerius and Studio Job. The interior features a compact setup of bedrooms with bunk beds, elevated bathrooms and raised podiums with king-size beds. All four bedrooms are flooded with light and views. The first floor includes the kitchen, living room and bedroom that doubles as a library, designed Studio JvM.

The villa is thermally insulated and features ground source heat pump, radiant floors, heat exchanger and uses only hydroelectric power generated by the nearby reservoir.