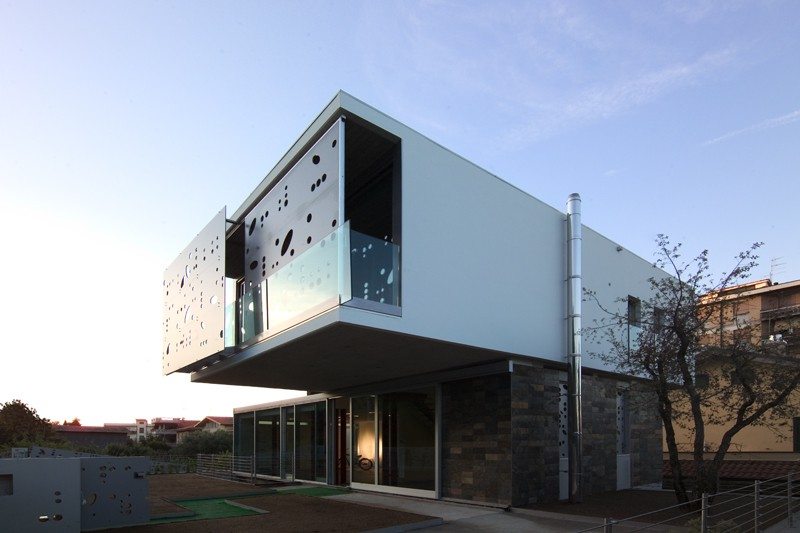 The objective was to create the illusion of a view where none exists. This has been achieved through the use of screens that play with light and shadow, both on the house and in fencing. In return, the screens provide a level of privacy.  The home is a simple box on box layout creating good division between shared and private spaces.

House Capece Venanzi is a suburban house,  on the Adriatic coast , in the segment between Ascoli Piceno and Pescara. It’s an “intermediate” area “without quality”; a strip of land without buildings, between the plain and the hill.

The project idea is to construct a building with an approach completely open to the hill, the hill that is seen as a sort of green “sea” on which to overlook. The plant is defined by a development on three levels:

The main compositive topic is played on the metaphor of the macrotransposition of a piece of the game of tetris. The two opposing volumes put on scene the two parts of the building and point to the diversity of use with a double  treatment: a plinth clad in stone with a mass of white plaster. The base of stone is “cut” on the western front by a glass wall at full height, while the stereometric volume on the ground floor has a network of free-form and circular openings. The series of free holes are also the pattern of aluminium panels that screen the large south-west openings and that shifts to the ground floor drawing fences, gates and closure systems.

The light is one of the materials of the project. The system of openings cut into the wall and on the covering floor designs the shadows during the day and lights from the second floor; on the ground floor light floods all the spaces. At night, a led lighting system (managed by a controller) defines a set of “backgrounds” that transform the first floor glass façade  in a  luminous screen.

The House of Secret Gardens

The Schell-Wheeler Home and Office